Web3 Marketing as a DAO

Starting Web3 Marketing as a DAO

Mimo Labs will come up with new products on top of the protocol & market this products, but the DAO needs a marketing independently from Mimo Labs & their products. So we could grow as a protocol.

Protocol Marketing has the aim to grow the usage, users & TVL of the protocol, for that there are a lot of good examples of Web3 marketing activities, which other DAOs are already doing.

For Ressources we would need someone who manages fulltime the marketing activities only for the DAO and are developing new Quests & competitions. Jean & Starny have a parttime committment at Mimo and their capacities are already filled with proposals & other DAO activites.

In this post you will find an example for such marketing activity we could do as a DAO. I do think this is important for us as a DAO to do, if we want to get & stay relevant as a protocol. 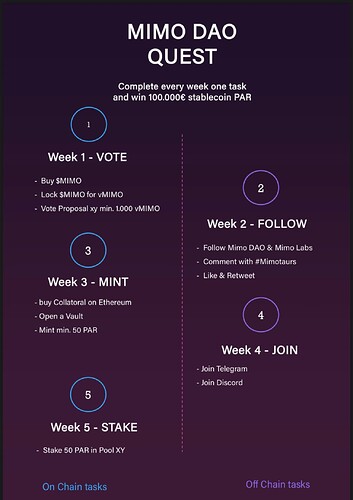 Hi. I agree that there is a lot of room of improvement in this direction. I fullheartly believe that we are not recognized for the level of work that the team puts into the protocol.

However and due to the lack of resources I think we should play the educational part and communicate the revolutional aspect that we think Mimo Protocol is going to be.

At a later stage and with hopefully growing funfs from operations we might spice it up with mentioned strategy.

I think we could also revive sporadically the already very good podcasts… There are gems in it… Of what we/the team thinks the protocol aspires to be.
Happy new year everybody and let us hope that mimo becomes the next most usefull defi protocol with enduser applications/on off ramp that we think it might become.

I think it is too early to start promoting before offer a product people want to use. I mean the project in its current state is out since 2 years now and I don’t think it has much people using it beside the guys that farm mimo and sell it directly after.

Let’s wait few weeks until they release the main products and then use these information for promoting!

Good point! The educational part with the podcasts are very professional and should be focused also

However additional marketing focused just on the protocol could be very effective even with little ressources.

I think the main products will have different marketing than the DAO. Also we should prepare, what if the new products will not come out in a few weeks but end of the year due to third parties problems?

And the protocol has good products to offer that we can tell the world.

Hi, I thing we all agree that the overall goal should be to make PAR more liquid/ available/ visible. In my opnion we need some more features for that. Currently we are on a few Dex‘s and the PAR pools are not filled much. Although they are incentives quite good (PAR-USDC, PAR-Mimo, PAR-JEurs on midas).

Based on that, I assume that Defi consumer migth not see so much value at the moment? Otherwise we would have been more recognised up to now?

At the moment I think there is already something to advertise (the need for decetralised stablecoin pegged to euro) but maybe not sooo much to Defi? (Don’t get me wrong. I like the protocol very much and think there is a lot of potential.) Currently you could advertise the over-collaterised decentralised stablecoin pegged to euro, PAR staking (fees from the protocol), pools and that the plattform which is seccured by audits.

Anyway, I also see a markting campaign beneficial. Nethertheless to my opinion the timing is also very important. I would not start with it right away (it could fizzle out). Maybe once leverage vault/ inception vault are live on the mainpage?

I like the structure which has been proposed (Mimo Dao Quest). Maybe we start here to collect ideas for every week which you have proposed. After a couple of days we migth sum-up the week and go to the next one? Just as a kind of brainstorming. After that we could align with mimo labs what is possible and makes sense?

I also like the educational part, the revolutional aspect and that a decentralised stable coin pegged to the Euro is needed (As I understood that was also a reason why Mica was raised… to protect euro from the dollar).

Maybe it makes sense to raise short video clips to explain why it is important to have PAR (as already done in the very good educationals texts)? Something like 5 video clips which explain the need from different perspectives. At the end of each video clip there could be a hint/ link to the campaign (Mimo Dao Quest)?

You are all right

In my opinion we need to come back from the early basis for marketing, cause confidence has been destroyed, and simple things to atract new and old users :

First the project is not a scam and here to stay

thirdly the need for decentralised stablecoin pegged to euro not coming from an American actor to keep sovereignity.

Maybe with this we will have more liquidity. Liquidity is the key but the problem with incentives is that liquidity is mercenary no more incentive ==> they go away.

Am afraid we could have some problems with your quest cause it’s the principle of a lottery cause to earn you need to pay. And it’s regulated in every country. Maybe we could spread it as a rumor, put it in the airdrop excel spreadsheet created by Starny, Jeanbrasse and manu redpills.

But all this, is for the protocol. For the Mimo token i don’t know what to do. I think the team locked too much token in the woting system. They did it with good intentions i assume ( to show they are confident in the longterm etc ) but in the other hand we, the users have lost both governance power and the incentives. And i don’t see solutions but am out of the subject with this point. Cause it’s not related to marketing

i like your idea very much!
i think we can work this out and have a plan ready to implement.
at the same time i am not sure if today is the right day to start all of this. We still need a good/better usecase for the mimo token. So question is if we wait a bit longer and then people see the full potential of mimo. Or we do it now.

As some of you already mentioned I personally don’t think that at the moment is the right time to do something like this, especially when there is no platform to automate this, because otherwise you are getting spammed with fake participants etc… I talked with George before this post and he suggested me https://galxe.com/ . I looked into it and it’s only working with NFTs as rewards. I still have to talk to someone if those NFTs could not work for claiming the rewards like a specific PAR/MIMO amount (similar to the Trust Wallet event recently), so we could do something like this in the near future. NFTs are for some time now one of the few things in crypto that are still growing (in user numbers, activity etc., and not price) in a bear market so we are looking into it for quite some time now, you can expect something in that direction with a future product

.
I also have to agree with @Squirrely and @Dossy on the conclusion that from a product perspective, we are not ready yet. Especially on the defi side we need to have Supervaults and Inception vaults fully released so that users can easily use the platform and are not joining just temporarily for the rewards, in this example, and leave then due to a better user experience on other stablecoin protocols.